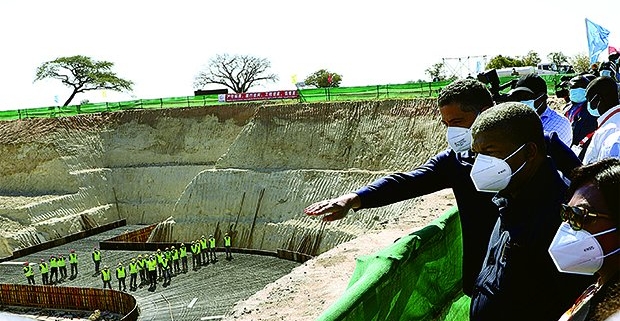 The drought in Cunene

The drought in southern Angola is a phenomenon that plagues the region over and over again, causing hunger among broad strata of the population.

As of the end of 2020, the region faced the worst drought in 40 years. According to the spokesman for the World Food Program (WFP) Tomson Phiri, “the country has been experiencing a period of drought since last December, with rainfall below average”[1].

This scenario, which has been repeated, and will likely worsen due to global warming, as the World Bank warns, writing that, “natural hazards in the form of floods, erosion, droughts and epidemics (…) prevent development and are expected to worsen as the climate changes”[2], implies a structuring intervention by public authorities.

The objective of this study is to investigate the structural measures that the Angolan government is developing to present sustainable solutions to the drought problem. We focus on the province of Cunene located in the southern interior of Angola, which has been one of the most affected by drought.

In fact, since Angola became independent, it is only recently that the problem of drought has been taken more seriously by the authorities. Before these projects, the situation was somehow alleviated with water holes, however the suffering of the population remained or gradually worsened. The provincial governor of Cunene, Gerdina Didalelwa, on one occasion confessed that “these drillings have been done empirically and are only spending money”[3]. In other words, drillings can even be carried out, but only when there is professionalism behind it; only after an in-depth study was carried out by companies that have technical skills and a thorough knowledge of the waters.

In mid-2021, the Angolan government announced the planning and execution of several projects in the province of Cunene, which aim to structurally combat the chronic drought that ravages the south of the country.

The first of the projects we are going to mention is the construction of the water transfer system for the Cunene River, starting from the Cafu region.

This project is divided into two batches, the first of which aims to build a pumping system in the Cunene River, pressurized pipeline, open channel from the locality of Cafu to Cuamato and 10 chimpacas[4] (water reservoirs).

With regard to the second batch, the purpose is to build two water channels, from Cuamato, one (west conductor) going to Ndombondola, with 55 kilometers and the other (east conductor) to the municipality of Namacunde with 53 kilometers[5]

The construction work are being carried out by the company Sinohydro Angola, with an estimated budget of more than 44 billion kwanzas, if we include the two batches.

The start of the execution of this project has already taken place and counts on an environmental pact study that includes a protocol of the Southern African Development Community (SADC), as well as the sharing of information with Namibia.

The Cafu project is expected to be completed in the first quarter of next year, and it will benefit approximately 200,000 inhabitants and 250,000 head of cattle.

The second project that deserves mention is the construction of the Calucuve dam, located in the municipality of Cuvelai. This earthen dam is 19 meters high and has a storage volume of 100 million m3 of water.

The project’s budget is around 177 million dollars, with the company Omatapalo-Mota-Engil as the responsible contractor, and the construction period is 20 months.

The main purpose of the construction of this work is to supply water to the populations, and it is planned to satisfy the needs of more than 80,000 people, as well as meet the needs of approximately 182,000 heads of cattle.

On the other slopes, it will supply water that will allow irrigation throughout the year in an area estimated at 2,600 ha.;

It will ensure the sustainability of economic and social activities in the project area. It will reduce the problem of seasonal water scarcity in the northwestern part of the Cuvelai basin. And finally, to mitigate or prevent damage caused by floods to assets and activities in the local economy in cities located downstream of the dam (Cuvelai Delta area – Evale).

The lead time is 20 months.

As for the third project, the construction of the Ndué dam, it is an undertaking also led by Synohidro Angola, with a construction period of 30 months, and an estimated budget of around 192 million dollars.

It will be a 26 m high earthen dam with a storage volume of 145 million m3 of water, on the Caúndo River upstream of the Ndué.

Other equally essential goals are also highlighted, such as:

Provide water to allow year-round irrigation of an estimated 9,200 ha area and ensure the sustainability of economic and social activities in the project area and reduce the problem of water scarcity in the central area of ​​the Cuvelai basin.

Finally, the dam could become an important source of water supply for the province of Cunene.

The execution period is 30 months.

A final note also for the recovery of existing dikes and weirs in the municipality of Curoca, which is 334 kilometers from the city of Ondjiva[6].

It appears that in addition to providing irrigation and providing increased possibilities for water distribution, these works will directly benefit 335,000 people and 492,000 heads of cattle, costing around 400 million dollars.

The Portuguese participation in these important construction work is relevant. Mota-Engil has a relevant stake (50%) in the consortium that builds the Calucuve dam (Project 1), having won the respective tender. COBA, also based in Portugal, is the supervisor of the Ndúe dam (Project 3). There is thus a significant intervention of Portuguese engineering in these structural projects.

Over the past two years, Mota-Engil has undergone a vigorous restructuring that has been reflected not only in Portugal, but also in Mozambique and Angola. It should be remembered that in mid-2020, the company established a partnership with the Chinese CCCC, which defines its participation of more than 30% in the construction company controlled by the António Mota family[7].

Shortly thereafter, Mota-Engil obtained a contract in partnership for road rehabilitation and construction in the Lundas with its subsidiary, with a value of around 280 million euros. On that occasion, the company underlined that it would reinforce its order book in the market, seeking to maximize the use of the assets that the group has in the country.